Plastics: the rise, the fall and everything in between

Plastic is now considered to be a necessary evil: we don’t want to live with it, but we can’t live without it either. Not yet, at least. We have become more environmentally aware than ever, so we are desperately trying to reduce our use of plastics. Travel coffee mugs instead of single-use plastic coffee cups, reusable drinking containers instead of water bottles, reusable grocery bags, paper straws, bamboo toothbrushes and even reusable cotton swabs or facial pads: you name it. Surprisingly though, plastic was originally produced as a sustainable solution to help save the environment.

The rise of plastics

Plastics is a collective name for a material called polymers, actually meaning ‘containing many parts’, which consists of long chains of molecules. These polymers occur both naturally, in the form of cellulose or petroleum and other fossil fuels, and synthetically. The invention of synthetic polymers would revolutionize the world. They have indeed allowed us to make durable, lightweight and more flexible plastics, therefore expanding its potential use.

World War II would cause the plastic industry to boom, offering a substitute material for other scarce resources. Plastic production in the United States alone skyrocketed by 300% . Not before long, we considered plastic to be a miracle invention that would serve as a replacement for any substance, because it was economical and its purposes appeared limitless.

“The possibilities of plastics gave some observers an almost utopian vision of a future with abundant material wealth [...].”

The fall of plastics

If plastic was, and some will argue it still is, such a prodigious product, why did its reign seems to come to an end? Plastic’s success would also herald its demise, because plastic is easily disposable, it is also designed to last forever. In the 1960s, the incoming tide of plastic pollution and litter was first being noticed in the oceans, an era during which people became increasingly aware of environmental issues. As awareness and concern about pollution spread throughout the 1970s and 1980s, plastic debris and its persistence began to trouble observers.

In addition, plastic didn’t appear to be as harmless or sanitary as previously thought. Additives and certain chemicals that made plastics so strong, lightweight or flexible potentially posed human health risks. There was no knowledge about how the chemicals might negatively affect our food and water or what results its exposure and continued accumulation in our bodies would generate. On top of all that, plastic became progressively associated with cheap, replaceable and fake products.

Plastic’s reputation suffered further after the so-called “Blue Planet effect”. Scientists and industry experts would argue that the plastic issue had been known for a long time, but the general public was not aware of how much plastic was in the oceans nor did they realize its impact on marine life.

Premiered in 2001, BBC’s documentary series Blue Planet would reveal the troubling reality of plastic pollution in our oceans and push the issue in the public arena for the first time. The ball started rolling after that. Blue Planet II, also a BBC documentary, broadcast in 2018. It was a huge hit and would again be a catalyst in public awareness about the environment and our wildlife. 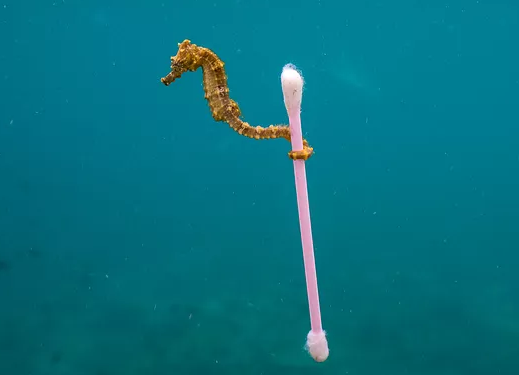 Underwater wildlife photographer Justin Hofman’s 2017 iconic picture of a seahorse  clinging to a discarded bright pink plastic cotton swab and the video that made a sea turtle become the anti plastic straw poster child, changed our world’s perception on plastics. People around the globe were struck by the heart-breaking images that displayed the detrimental impact on the environment and wildlife of everyday household products that everyone uses.

Scientists have known about the plastics issue for a long time, but it's only very recently that the general public became more aware of the impact of plastics, and how they could change their behaviour and use their purchasing power to drive positive change in the industry.

Time for a change: no more plastic?

Plastic was originally introduced as measure of convenience, the issue of it having to be recycled simply wasn’t a real concern before. With an ever growing public awareness of plastic’s destructive impact, the plastics industry offered recycling as a solution in the 1980s. Today, a meagre 9% of all plastics that has ever been produced has being recycled, 12% is incinerated and some 79% ends up in landfills or in our oceans . If we do nothing, there could be more plastics than fish in the oceans by 2050, some predict. Why, in a technologically advanced age of self-driving cars and potential space tourism, isn’t more plastic being recycled?

“The world is at a turning point. For millennia, production and consumption cycles were circular, consistent with the “waste equals input” flows inherent in nature. "

If recycling was easy, everybody would do it. Our current produce-use-dispose system demonstrates that it isn’t that straightforward. First, plastic comes in many different shapes and sizes, depending on its purpose. This benefit has also been the biggest downfall because it's still too hard for our current technology to distinguish between various types of plastic materials and separate them from each other. Recycling them together, they turn into very low-quality plastic that has little or no viable market.

Second, recycling demands huge additional efforts and big investments. It is more economical to produce new plastics by using virgin materials, as opposed to used or recycled plastics. Governments are writing legislations to encourage companies to use recycled plastics and it's those types of systems that will tip the scale and make it financially feasible to recycle more types of plastics.

Ultimately, and perhaps more decisively, it all comes back to a cultural matter: plastic has become indispensable in our modern, fast-paced lives. Plastics are all around us and we all benefit from them. As we use plastics for more purposes, we're also creating more plastics. Yet, with whopping 8 million tonnes of plastic entering the ocean every year, we need to rethink our current plastics economy. Are we truly ready and willing to forgo our luxurious lifestyles?

Power to the people

Plastics is an everyday story. Every brand, every country is implicated. Just a few images took the world by storm. Greenpeace’s #IsThisYours flooded both Instagram and Twitter , trying to shame companies for single-use plastic packaging. The public increasingly appreciates its potential positive contribution, and social media have played a large role in this. 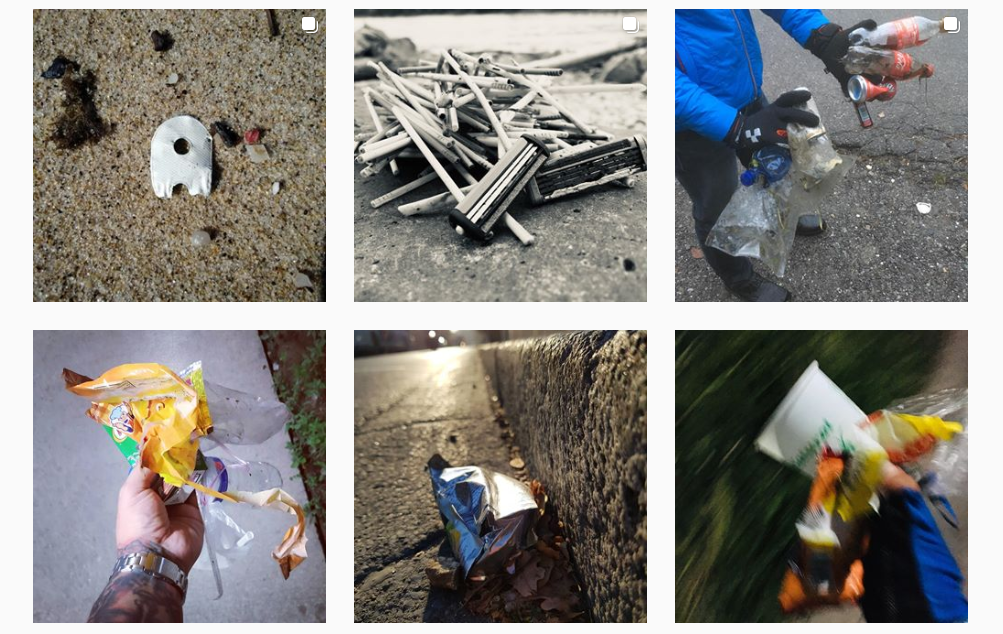 Consumers have grown steadily more distrusting of the information they receive. Social media have allowed them, more than ever, to publicly question certain data, challenge prevailing policies and feel more involved in the debate. As a result, companies are making bold promises. With climate change, it may well be the first time witnessing consumers having that level of power over what companies decide on.

“People don’t necessarily care more about the environment than before, but we have all become more aware and it has just become more popular.”

Challenging and adjusting current legislation and policies is beneficial for all parties on the long-term.

Some companies could switch completely from plastics to cardboard overnight, if they had to. Due to their product type, however, consumers wouldn't notice the difference if they did switch over to cardboard packaging. As a result, those brands aren’t taking any action. It's mostly brands that have a higher visibility that are making changes. Other companies aren't changing because at the moment it would be so much more expensive to change, and there are some items that people aren't going to stop buying, regardless of the plastics being used. So consumers won't act on it and some brands understand that very well. One for the major factors why companies are hesitant to ban or decrease plastic packaging is cost, indeed. Government should offer support to drive the market to recycle more. Several EU member states are considering to introduce the so-called modulated recycling fees for plastic packaging , which should urge brands to invest more in the right technologies and choose the right kind of materials.

“Healthy oceans can support healthy people and healthy profits; if we let them[...]. It means using legislation, innovation and consumer choices to replace plastic related demand and pollution with better alternatives.

Other initiatives are being taken. Europe now bans and restricts certain single-use plastic products since May earlier this year, which together constitute 70% of all marine litter items.  And China’s 2018 ban on plastic waste imports  has pushed the plastic packaging landscape to find more viable solutions for plastic waste.

“Recycling systems can never keep up with plastic production. The only solution to plastic pollution is producing less plastic.”

A shift in the Packaging industry?

The plastic packaging industry has changed a lot and it is still evolving significantly. Yet, more transparency is crucial. Recycling is one of the options. Sometimes, however, it is more energy-intensive to recycle certain types of plastic and it's unsure whether it is actually better for the environment to recycle them because of the higher rate of carbon emissions associated with transportation.

The big brands and retailers are starting to understand: the solution for a more sustainable and innovative future would be lots and lots of different initiatives combined, and every little bit counts.

Is cardboard packaging the holy grail? The answers is debated. Introducing innovative packaging strategies to ensure that they can be reusable, recyclable, or compostable and  develop new circular models in which reusable packaging replace single-use packaging are few of the options. 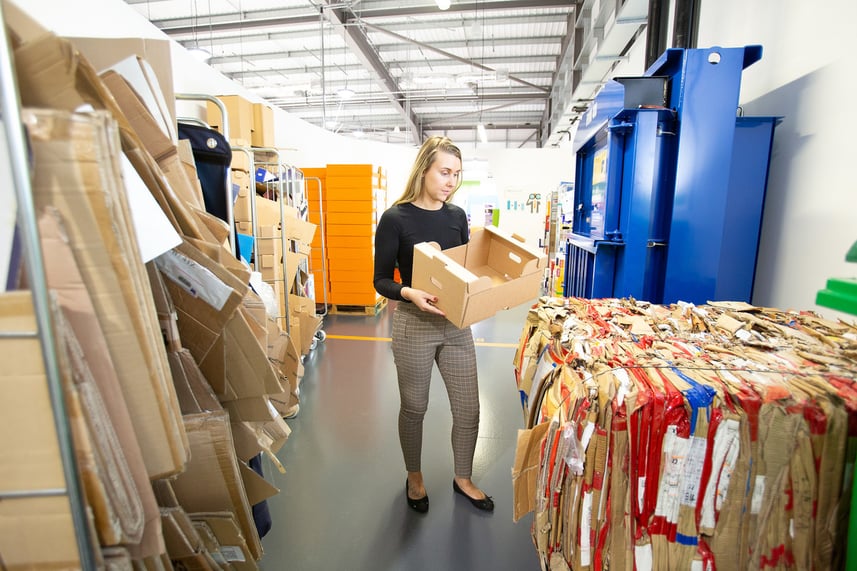 The packaging industry consciously needs to choose for smarter packaging in which cardboard can definitely play a huge role in this.

Again, there is not one simple solution that will stop plastic from pollution our oceans. Whether Cardboard is the revolutionary solution or not, you can read more in the next episode.

Redefining Packaging for a Changing World

We are different because we see the opportunity for packaging to play a powerful role in the world around us.